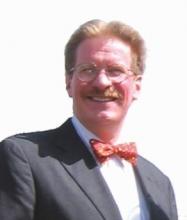 American conductor, organist, harpsichordist and composer, holds a Bachelor of Fine Arts degree in organ performance with honors from Carnegie-Mellon University, Pittsburgh, Pennsylvania, a Master of Music degree in church music from Westminster Choir College, Princeton, New Jersey, and earned his Doctorate from the Graduate Theological Foundation of South Bend, Indiana where his particular area of study was pre-Reformation English liturgy with an emphasis on the Sarum Use and the ecclesiastical music of the English Middle Ages beginning with chant and culminating in the complex polyphony of the late fifteenth-century Eton Choirbook. He has served on the staff of several distinguished churches, including the Washington National Cathedral (of which he is a Fellow), the Princeton University Chapel, and Saint Bartholomew’s Episcopal Church, New York City. He recently completed a fourteen year tenure as organist and choirmaster of historic Christ Church, New Haven, Connecticut where, under his leadership, the choir and music program gained an international reputation for excellence. He has appeared with numerous ensembles including the National Symphony Orchestra, the Handel Festival Orchestra, the Washington Chamber Symphony, the St. Louis Symphony Brass, the New Haven Symphony Orchestra, the Choral Arts Society of Washington, the Cathedral Choral Society, the Bach Society of St. Louis, the Carnegie Brass Quintet, the Fine Arts Brass Quintet, the Annapolis Brass Quintet, and the River City Brass Band – the original fully-professional English-style brass band in the United States – with whom he has also recorded. His compositions are published by several American publishers and have been recorded by leading choirs around the globe. His work is heard regularly over NPR and the BBC and he has been the recipient of many awards and honors. Robert Lehman joined the staff of the Church of St. Michael & St. George in St. Louis in January of 2008 and divides his time between Missouri, Connecticut, and New York with his wife and children.