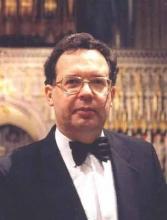 John Scott Whiteley is Organist Emeritus of York Minster, having worked at that great cathedral from 1975 until 2010 when he retired from the Minster in order to pursue his freelance career. During the past ten years he has become well-known for his performances on BBC2 and BBC4 television of the complete organ music of Johann Sebastian Bach. 21st-Century Bach was a joint commission by BBC2 and BBC4 and began in 2001. The series continues and is planned to run for several more years, after which time some eighty programmes will have covered Bach's entire output for organ. The series was described by the British daily national newspaper, The Daily Telegraph, as "a triumph both nationally and musically." Having studied at the Royal College of Music with Ralph Downes and W.S. Lloyd Webber, and with Flor Peeters in Malines and Fernando Germani in Siena, John Scott Whiteley won first prize in the1976 National Organ Competition of Great Britain. He then performed at the Royal Festival Hall, for the UK Annual Conference of the Incorporated Association of Organists, and at festivals throughout Europe. The most recent of these have included the 2005 International Organ Festival in St. Albans, the 2006 Musicometa Festival in Rome, and the 2008 Bach Festivals in Skiernewice, Poland, and Camaiore, Italy. In 2013 he was selected as the organist for the Bach Recitals at St Petersburg's Mariinsky Concert Hall, which took place before audiences of over a thousand people. Since 1985 John has toured the USA every year and for twenty years he was represented by the well-known agency, Phillip Truckenbrod Concert Artists. His exclusive representative is now PVA Media. John Scott Whiteley has researched and published books about the music of both Bach and the Belgian composer, Joseph Jongen. He has contributed articles on Bach to The Organ Yearbook, and on Jongen to The New Grove: Dictionary of Music and Musicians. In 2003 he was principal lecturer and recitalist at the Colloque Joseph Jongen organised by the Conservatoire of Brussels. He has also transcribed, published and re-recorded the famous Symphonie improvisée recorded by Pierre Cochereau at Notre-Dame in 1963. Between 2000 and 2008, John Scott Whiteley was Director of the Girl Choristers of York Minster, with whom he recorded a CD of the music of Lassus in 2008. He has taught the organ at the Universities of Hull and Huddersfield, and, as a visiting tutor, at the Royal Northern College of Music. He has often been an adjudicator for organ competitions, and he is an examiner for the ABRSM and for the Royal College of Organists, having been a member of the council of the RCO for over ten years.