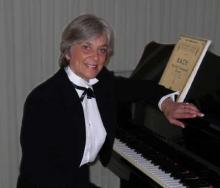 Patricia M. Long, an American composer, was born in Waco, Texas. Her advanced studies in music (piano, literature, theory, and history) were done at Baylor University and the University of Texas at Austin. In music composition and orchestration, however, she is proficiently self-taught and has studied extensively, on her own, the written scores and recorded works of major composers from all periods. Many of her own compositions, particularly choral works, have been performed in both the United States and Europe. Her music bridges the classical and the contemporary, and she has been described as a Neo-Romantic composer. Her numerous compositions range from short vocal and instrumental pieces to large-scale choral and orchestral works, most notably her Symphony No. 1 in D Major; Suite for Piano, Orchestra, and Special Percussion; and Mass in E-Flat (“Millennium”). Ms. Long’s recordings include a CD of her Mass in E-Flat (“Millennium”), the earlier version of which was recorded in 1998 with the renowned Texas Boys Choir, Laudate, and the Westlake Chamber Ensemble (CD available at Amazon.com). Part II of the Credo and additional orchestration throughout the entire work were added later. She has recently completed a choral symphony, set in both Welsh and English, entitled Choral Symphony in D Major (“Welsh”). The world premiere of that work, currently in the early planning stage, is slated for late 2013 in Cardiff, Wales. In addition to her classical compositions, Ms. Long has written numerous songs. She also writes poetry and short stories and has published two small volumes of these writings, entitled Words and Falling Up in Three Parts. Ms. Long has two adult children and a granddaughter. She and her husband currently reside in Lakeway, Texas.